How is Janeclayton getting 2M yearly visitors? 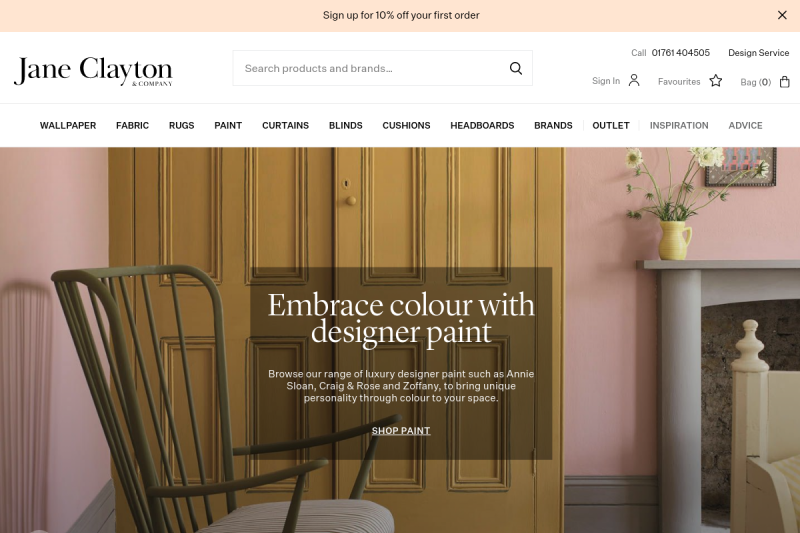 What do we know about Jane Clayton & Company?

What is Jane Clayton & Company's Revenue?

What does Jane Clayton & Company do?

Jane Clayton started making curtains at her kitchen table in the late 1970s. Fast-forward 40 years and Jane Clayton & Company is one of the most well-respected names in the world of fabric, wallpaper and made-to-measure furnishings. Designer collection: Since 2013, Jane Clayton & Company has been headed up by Jane's son Bertie whose vision is to make interiors brands accessible to everyone. With this in mind, our buyers ensure we have the best, the exclusives and the most popular fabric and wallpaper designs available. The result is a collection of over 100 different brands, from coveted designer names to emerging independents. With dozens of new collections added each week, there's always something new and unexpected to discover. Bespoke made-to-measure: Made-to-measure is and always has been at the very heart of what we do. Our dedicated team of in-house makers can transform fabrics into bespoke cushions, blinds, curtains and headboards, all of which are skillfully finished by hand. With years of experience, our team create some of the highest quality soft furnishings available online. Customer service: Our offering is backed-up by unrivalled support provided by our friendly and approachable Customer Service team. Each team member has specialist knowledge, enabling them to provide expert advice on all aspects of your fabric or wallpaper project and helping us achieve a 4.8/5 rating from nearly 6,000 customer reviews.

What are the monthly traffic metrics for Janeclayton?

How fast is Janeclayton growing?

Janeclayton has grown by 59.1% in the last 6 months according to SimilarWeb.

How do people interact with Janeclayton?

Last month, Janeclayton received 159k visitors who spent an average of 5.0 minutes on the website and visited 5.0 different pages per session. Overall, 54% of people bounce on the first visit.

How do people find Janeclayton?

What are Janeclayton's monthly US traffic stats for Google paid and organic traffic?

How much organic traffic does Janeclayton get from google search?

Janeclayton gets 6k in organic visits which has changed by -78.1% in the last year.

What keywords does Janeclayton rank for?

What technologies does Janeclayton use?

What are Janeclayton's top ads on Google?

What do Janeclayton's customers say about them?

If you live in Europe don't buy from this company

Ordered a single roll of paper on 18th December. What you don't find out on ordering that this company don't hold stock. I only found this out when I queried at a, later point when it was likely to be delivered and was told when it arrives from the supplier. It was finally dispatched on the 5th January 2021. After brexit. I subsequently received a 43 euro import duty and tax bill on a £99 roll of paper. Plus I paid postage. I contacted Jane Clayton who replied on the 23rd February that "of course" they would refund this immediately and asked me to send a copy of the bill I'd received. I sent this straight back and asked them to confirm they had received it and when the refund would be processed. Since then, and despite 3 further emails, no reply and no refund. It's now 7th March and waiting. So, if you live in the EU and have previously bought from this company try and source your products in the EU. Had I been told by this company it wouldn't be dispatched till January and might attract extra charges, I'd have tried to source it in the EU. I checked, and from Sweden where this paper is from the total bill with delivery and import tax to France it was 110 euros. UPDATE: Refund has now been paid, which was more than the value of the tax. So, this was a positive gesture.

First samples in mid Jan arrived safely (though included 2 other peoples paperwork and samples) and the order I placed came quickly. Since then I've placed 2 more sample orders, received some but not all and not all the correct ones. I've emailed 3 times and received no responses now for 5 days plus left 3 phone messages which they promise to return "within 4 hours". So far 4 days not 4 hours and nothing. So disappointing. Really poor service and now wouldn't trust them with another order. They've taken my money for the samples but can't be bothered to follow up.

I ordered and paid for curtain swatches…

I ordered and paid for curtain swatches on 19th January 2021. It’s 7th February and all they can say is that they’re busy. Funnily enough I’m busy too, but not busy choosing curtains it seems. I resent paying for a curtain swatch, especially one that doesn’t arrive

I have had a very poor experience with…

I have had a very poor experience with Jane Clayton and Co. I ordered 4 rolls of wallpaper spending over £400. They were due to be sent in the 1st Feb. They have sent two but I’m still waiting for the other two. I can’t get a response. I’ve phoned and left two messages over a week period and although they say they will get back to their customers within 4 hours I haven’t heard anything. I’ve also emailed twice during the same week and have not had a response either. It’s not good enough. Very poor.

Unfortunately I have now had multiple bad experiences. 1. Placed an order but was then told after several days that the material is out of stock. 2. Then purchased wall paper and was send mismatching batches which now need to be removed from the wall and etc etc. 3. Placed another order but again no news. 4. Have called them 4 times and as per their messages someone will be in touch in the next 4 hours but no news. No reply on e-mails neither. Conclusion : not reliable, wrong information and support given by customer service and what you see on the website is not what you can order / receive

I placed an order with this company 10 days ago and it still has not been dispatched. I have emailed three times over the last few days and phoned and left a message. They say they will come back to you in 24 hours but they have not. Terrible service. Do not order from this company.

I placed an order 2 weeks ago has not been dispatched

I placed an order 2 weeks ago and I have not received any communications on when my wallpaper will be delivered. Requesting a refund, hoping it will be issued as fast as the money was taken. I will never buy anything from this shop again

What are Janeclayton's most popular pages?