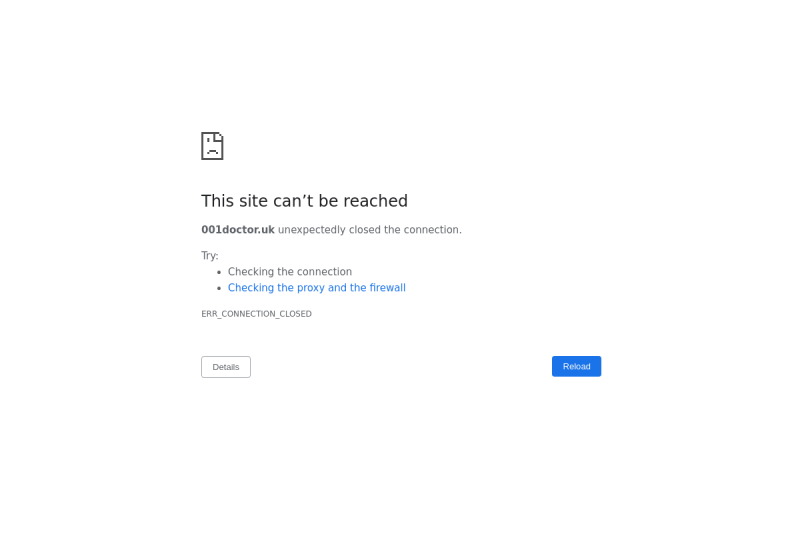 What technologies does 001doctor use?

What do 001doctor's customers say about them?

I can only echo the previous reviews

I can only echo the previous reviews. Day 2 test arrived on day 8, day 8 test arrived on day 11 or later. No response to emails or phone calls. Got two different results for one test, both for swabs taken on a date different to the one on which ours was taken. So in all, kits late, no customer service and inaccurate results, which has far wider implications. Surely the purpose of the tests is to provide reassurance and ultimately try to prevent the spread of the virus.

Totally SCAM. AVOID! update: Dear Jerry from 001Doctor, I've emailed you many times and you never answered me. I ordered “Day 2 and Day 8” Home test Kit March 24. The order number is #8844 The company had to deliver my tests on the second and eighth day after the order (I paid £12 for Express shipping). I’ve tried to contact company at the specified number (020 8087 2403) and via email, but no one answers. As a result, the first test arrived 2 weeks later, when it was no longer needed (my quarantine ended and the company did not fulfill its obligations). 3 months passed and this company never sent the second test. In addition, I received tests from “Lion CLOTHING” and it looks like a scam. Because I ordered my test from medical organization not a clothing store. There is no excuse for such delays. The company has violated all the deadlines and this is absolutely unacceptable! I forced to contact the Member of Parliament for the Cities of London and Westminster.

Do not use this service

We have been waiting 9 weeks for a refund on a delayed test and release test. The results took longer than the quarantine period and we cannot get to speak to anyone and the there is no response to emails. Show you everything you need to know about the UK Gov as this is their recommended service

Unbelievable. Ordered day 2/8 tests. Day 2 test arrived on day 8, day 8 arrived on day 13. In both cases the family member visiting has already left UK. She was chased by test and trace on day 5 and threatened with fine because she did not return day 2 test, the one which arrived after she left. Been in many calls with 001doctor, they sent 2 emails saying that my refund has been processed, but payment never arrived. Asked my bank for chargeback and they had the cheek to dispute the payment, claiming that tests have been delivered. This is an utter disgrace and totally outrageous. If the chargeback is cancelled I will for sure do anything to get a CCJ against them. Just as a matter of principle.

After reading your reply JERRY: I cannot be reached as I am in Jordan and I dont have roaming facilities here. However I have already sent an email address provided by you at 13:50 UK time. I can be contacted on my email attached to order number 18228. I really hope i receive it as the last person i spoke said the same thing which was in April. I am more than happy to change stars if i receive my refund thank you very much. Order number 18228 Date 28th March I cancelled the test on 30th march and called on 2nd april then on 12th april and then 27th april asking for refund. Reason: I ended up in hotel quarantine from 30th March till 11th April, So i did not needed Day 2 and Day 8 Tests as, It was included in hotel quarantine package. I have communicated this already 4 times and no response to my email or calls. Now this is gone long enough and if its not sorted soon enough then I will have no choice but to contact trading standards and Local council which is supported by evidence. I paid £182 on 28th March.

My day 2 and 8 home test kit did not arrive in time. However, I am happy with the service I received after the event as 001doctor.uk did contact me and they provided me with a full refund.

Did not receive my Covid tests

Did not receive my Covid tests. Had to do a test to release to start my job. Called emailed non stop to try and sort it, no response. Tried to get it refunded by nationwide. They apparently supplied evidence to say I did receive them. So I spend over £500 on Covid tests 200£ of which I did not receive. DO NOT USE THEM!

It's ok you responding on trustpilot

It's ok you responding on trustpilot. I emailed you many times on different emails. Please check all the emails so you can respond. But it's a bit late don't you think.