How is Anwb getting 99M yearly visitors and annually spends $1k on Google ads? 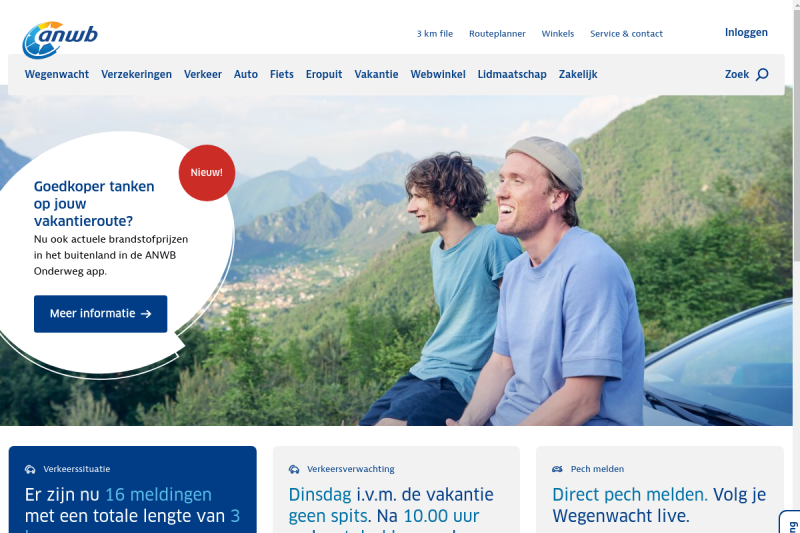 What do we know about ANWB?

What does ANWB do?

What are the monthly traffic metrics for Anwb?

How fast is Anwb growing?

Anwb has grown by 2.7% in the last 6 months according to SimilarWeb.

How do people interact with Anwb?

Last month, Anwb received 8M visitors who spent an average of 2.9 minutes on the website and visited 3.0 different pages per session. Overall, 50% of people bounce on the first visit.

How do people find Anwb?

What are the web statistics for anwb.nl?

What are the main keywords for anwb.nl?

Who are the competitors of anwb.nl?

How do people find anwb.nl?

What are Anwb's monthly US traffic stats for Google paid and organic traffic?

How much organic traffic does Anwb get from google search?

Anwb gets 522k in organic visits which has changed by 17.2% in the last year.

How much traffic does Anwb get from paid Google ads?

Anwb gets 89 visitors in paid traffic from Google which has changed by -61.8% in the last year.

How much does Anwb spend on Google Ads?

What keywords does Anwb rank for?

What technologies does Anwb use?

What are Anwb's top ads on Google?

What do Anwb's customers say about them?

They were helpful but also pretty…

Simply terrible. They didn't communicate to me that the membership fee was expired, they got to forced incasso directly. Requesting for a yearly subscription of 15,50 Euro a fee of 24,5 euros. That's 170% surcharge!! This considering they collected the insurance money monthly direcly from my account. If it's not enough, to end the membership subscription you need to call them!! (Not online in your portal!!) So if it's afternoon or during weekends or public holiday you can't cancell the service. That's what I call scam. Do not buy from them any service. For good cheap insurance buy the one from hema!!!

Last February the 10th I had to call a tow to take my car to a shop. It had overheated and blown something in the coolant circuit. While waiting for it to cool, to drive it slowly to a car shop, it also ran out of battery and would not start. I called the ANWB and they sent someone. They let me walk home, as I was close, and agreed to call me before so I could cycle back to my stranded car once they arrived. When the ANWB employee called he was already almost at my car. He was kind enough to tell me to relax once I told him I would run not to make him wait. Once I got there he instantly tried to fix my car. He quickly identified where the coolant leak was, took the time to show me, and let me know it was a cheap repair as he had seen this often in other units of the same model of my car. He then jump started my car to check that it was not starting because of a battery level failure and not some other more serious issue. It started. He then told me he could take me to an ANWB shop that would fix my coolant circuit for an extremely cheap price (around 100eur) taking into account I needed a new coolant expansion deposit. He arranged for a different employee to pick up my car (as his was not capable of towing me), gave me the phone number of the shop and his colleague's name. His name was Gorkhan, 2903. He was extremely kind, took the time to let me know the price of the repairs was low, waited for me to arrive by bycicle, and was clearly working hard as he instantly left after helping me. Before he left he told me his colleague with the tow should be quick, as he would be clocking out in about 30min. The tow colleague, Raymond, was very quick too, loaded my car into the truck, and took off to the shop instantly. I picked up the car later in the day, payed a symbolic price for the repair and everything was great. I even had the car cleaned on the outside. In all, these guys let me make a one year membership on the day, waited for me to return from home, checked my car problem and gave me a price, towed my car, fixed it, and cleaned it. Everything for 300EUR.

I have been in a loop for over a month. My payment is automatic in the ANWB system, however, I received an email (very impolite) from a money collector company (TKB) with this title "Do you want to get rid of your payment?"!!! I was shocked and right away I sent them all of my payment slips and explained that my payment is automatic and this is the documents! They did not answer me. I called ANWB and informed and they said that it is something wrong with our system. I inform TKB and again they did not answer. After a couple of weeks, I received the same email "last announcement" with something like threatening! (all for 15 euros while I paid them like 200 euro until that moment!). I called TKB and they said we will check, but as a result, I received an official letter from them that I must pay them the penalty! After many calls, I understood that the automatic payment is only for the car insurance!! for membership we have to pay separately. It means the company has various departments with different payment methods. I had to pay the penalty and it is a very unfair and confusing system!

I was encouraged to take an ANWB…

I was encouraged to take an ANWB membership so that i could get the item i wanted to buy in the shop, for a reduced price. I didn't think of it anymore until i received emails saying that my membership was up for renewal for a much higher price then i originally paid. I tried to reply, .....not possible. Looked at the website, ....no email contact possible. The only way to cancel the memberships seemed to be by phone, which i was not prepared to do from outside the Netherlands. The external credit company contacted me. Several times i explained that it was not possible to get in touch with the ANWB in a suitable manner for me. They told me they could not deal with this and threatened me with legal action. Finally i got mail option through my twitter communication with the ANWB. The letter will take at least 10 days to arrive.....Terrible serivce, never again!

I asked for pech help while having dynamo smoke. Crazy woman on the customer service came with custom policy like such incident we don’t cover. You should call your car insurance. What a bulshtt is that? I paid all pech help for anwb, accident is for my car insurance. Big company stealing customer money for custom policy.

I went online to close my account, followed the procedure and got confirmation. Little did I know that it only closes your 'online access account' and not your actual membership. 2 months later, I've received bills for membership, plus fines of 50eur from an external credit company for not paying the membership. You have a misleading page that gives the impression the account is closed. Plus If you aren't able to withdraw the money from my account, why would you continue the membership? Complete robbery

Worst company i have ever dealt with…

Worst company i have ever dealt with which is surprising from such a big organisation. I failed a compliant, had the complaint hander call me a liar basically to my face. The scam you in to locking you in to break down membership when taking car insurance out, and even when asked "can you cancel the membership at any time with no cost" they say yes when in fact the answer is no... and now i am left to pay a bill until Aug 2021 for roadside assistance when i do not even own a car! They just say also its in the terms and conditions (which are in Dutch only). Even though i ask the question directly to the advisor! The advisor also used the sentence "well you are in Netherlands", so you are fine to speak english when you want to take expats money , but then when it comes to disagreements it something different! Disgusting company - do not use them.... especially if you are an expat/international living here! To be honest, i do not even really care about the money, its like 130 Euros or something. It is about the principle and the lack of respect and people thinking they can accuse people of things without no basis. I will be sure to spread the word within my media contacts! shocking! ANWB - times have changed, this is not how you speak to consumers anymore!

What are Anwb's most popular pages?